In an environment where images are over-abundant and the spectator's eyes are exposed to a multitude of images every day, what role can creative visual work play in alluding to auditory phenomena? The combination of visual and auditory elements as a creative resource has a long history in art and the cinema. However, only in a few cases has it been deliberately used to generate uncertainty and stimulate the spectator's mind, allowing one to listen to what one's own mind produces in a kind of inter-subjective speculation. The experience of listening itself becomes a result of all the conjectures that have been produced by others previously while, at the same time, the listening is somehow based on similar personal experiences. 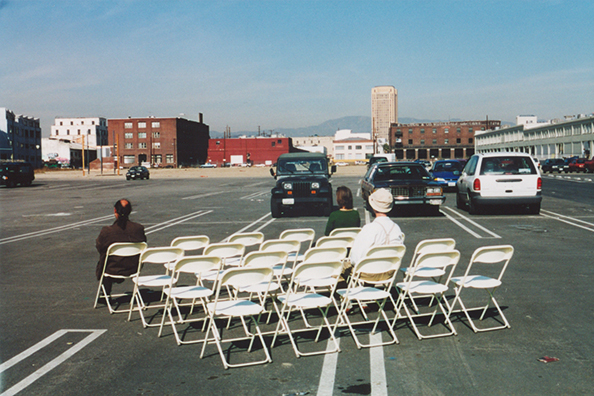 This process can be seen in À bruit secret (With Hidden Noise), the readymade produced by Marcel Duchamp in 1916. It consists of a ball of string whose ends are covered by two copper plates, held in place by four bolts. Inside the central cavity there is an object which can be heard, but not seen, which explains the title given to this «assisted» readymade, which involved the participation of collector Walter Arensberg, who placed the enigmatic hidden object inside it. Today Duchamp's readymade, which is owned by several museums, is kept behind glass and its effect is reduced to the visual power of the image and the associations of its title, together with the incomplete text engraved on the copper plates.

The playful, interactive nature of the object is lost when it is immobilised in a glass display case, as is its auditory feature. We would only be able to hear the sound by shaking the object, which is hypothetical in this case. However, given the immovability of the object, another unsettling aspect emerges, which we are going to examine more closely to discuss the role of sound, and which requires us to step back from what is purely visual. We shall take the frozen image of a photograph as our starting point for discussing the auditory component in Duchamp's work. The argument set out below is in line with the way in which Duchamp understood artistic creation in general terms and the work of art as an open mechanism in which the spectator has to «refine» what is found there.1 Outside the conceptual character of Duchamp's work, we are, therefore, interested in those features that release the sound we imagine. It is a sound that is only suggested by the visible characteristics of the work and only takes form in the spectator's mind.

The image and the play on words in the title, together with the wording etched into the copper plates, define the appearance of the readymade. However, it then requires the reflection of each spectator, which is when the work's reference to sound comes into play. What is suggested by the image and the significance of the words allow us to mentally grasp the sound of Duchamp's immobilised piece, our perception being fragmented and based on different elements. While the image and text are fixed by the exhibit, the sound we imagine is totally undefined. It may thus be more appropriate to speak of a recollection or evocation based on sound, than the occurrence of a precise sound.

These particular conditions of reception, in which the senses are fragmented, where the visual and the auditory seem to be completely separate, make it necessary for the work to be brought together, or refined, to use Duchamp's term, by each spectator, who is also a potential listener.

These particular conditions of reception, in which the senses are fragmented, where the visual and the auditory seem to be completely separate, make it necessary for the work to be brought together, or refined, to use Duchamp's term, by each spectator, who is also a potential listener. In a sense these characteristics mean that the work is also constructed on a social level, i.e. taking into account the multiple possible interpretations among the community of individuals who experience it.

The indeterminate elements introduced by sound in this process linked to the image, can also be seen in the more recent work of artists who explicitly deal with the theme of sound through visual forms, raising the eternal question of the predominance of the visual over the auditory. However, we can go beyond the debate to identify something that can be found in the affinity of sight and sound. It is illustrated by Listening Piece in Four Parts (2001), a series of photographs by German composer and artist Peter Ablinger which capture different open spaces where a perfectly aligned array of chairs have been set up, reproducing the seating in an auditorium. What is interesting about these images, apart from the literal reference to sound and the cultural awareness which allows us to interpret the arrangement of the seats, is that the semantic content the title again conveys for an auditory interpretation of the image. Ablinger's images thus allow us to see the established scenography of public listening from outside and prepare us for it by situating us at the precise moment when it is about to occur. It is then that sound is perceived in the mind of the person looking at the image, as happened with Duchamp's piece. Once again this occurs via a kind of shared memory of the situation.

Unlike works that immerse the spectator in a situation that has concluded, visual works referring to non-visual elements function as a provocation, a mechanism that places us at a distance from the image, emphasising the importance of the auditory phenomenon.

It certainly seems paradoxical that forms, which use visual metaphors to represent phenomena related to sound, revisit the act of seeing to generate an event occurring at a particular moment. A moment where sound plays the leading role but is not, in itself, the end. A moment that, as in Concrete Tape Recorder by Bruce Nauman2 can arise from the antagonism between the visual impression and the auditory idea produced in the mind of the spectator. The sound, to which all of them refer in one way or another, is only an abstract impression, lacking duration, yet full of meaning in the mind of the spectator, where it arises immediately, as if striking against the image and giving us an immediate living impression of the event, referred to by the image, so that we can almost be part of it. We are not merely speaking about the sound, but what the sound contributes, in conjunction with a markedly visual situation. Unlike works that immerse the spectator in a situation that has concluded, visual works referring to non-visual elements function as a provocation, a mechanism that places us at a distance from the image, emphasising the importance of the auditory phenomenon. From this point we move towards an auditory abstraction, which is, however, not the ultimate aim of the work. The sound imagined by the spectator, or the attempt to create it mentally, will be a springboard for one's intellectual experience of the work. The image does not, therefore, strive to represent the world, as happened with the creation of images subject to the hegemony of ocular-centric approaches, but uses the visual aspect to unleash another event; the image seeks out the subject who perceives the phenomenon, who has the ability to cognitively produce it. 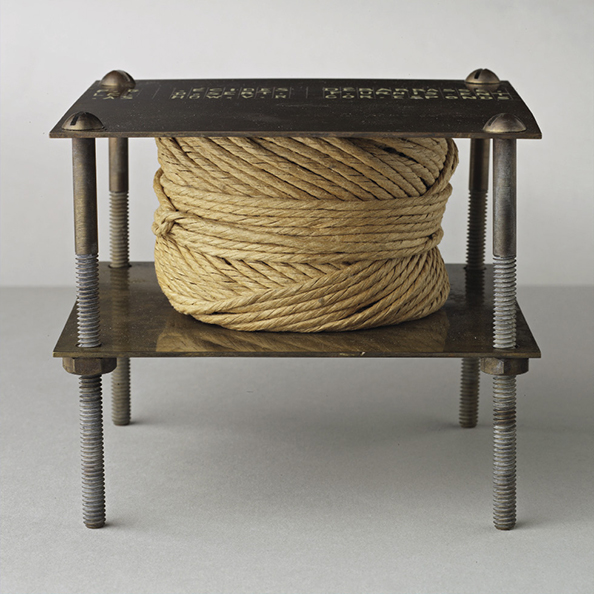 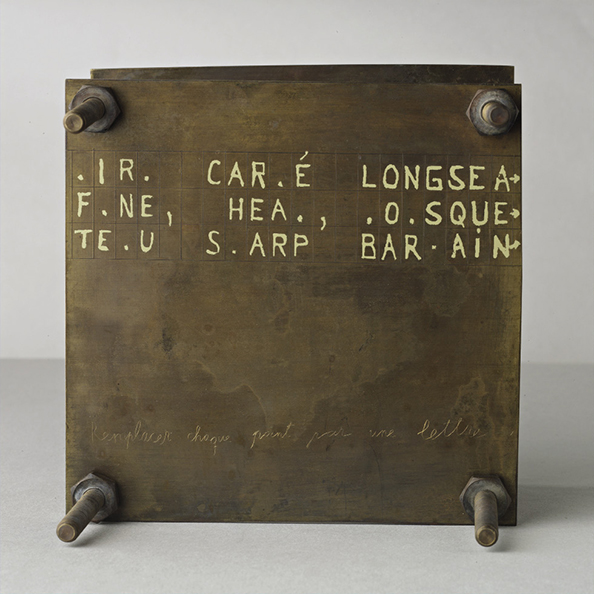 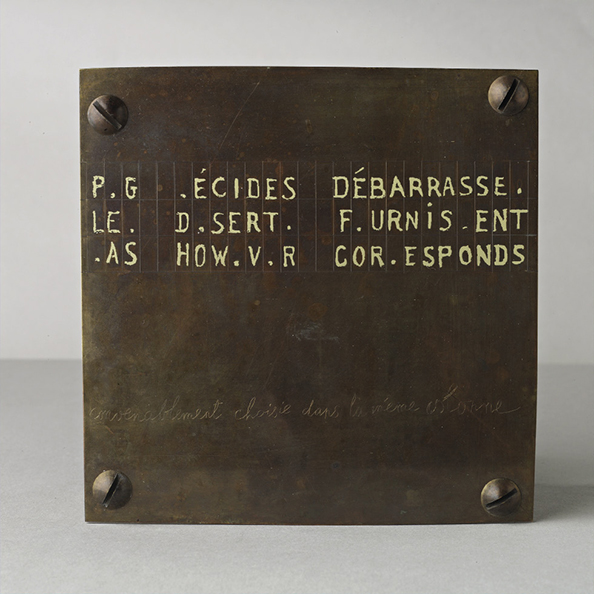 The search for subjects who also have a productive role is not exclusive to pieces like those by Ablinger and Duchamp, who allude to a temporal event through the suggestiveness of sound (silenced in the image and frozen in the title). A similar mechanism also plays a fundamental role in our experience of installations and works which are explicitly auditory and audible. The reader can consider Bernard Leitner's installations as an illustration of this idea.3 In his works, he closely works with the construction of spaces - physical or perceptive, through the use of moving sound. In these cases, there is indeed a set of specific sounds that determine what we perceive.

In such cases, the sound distances us from the visual characteristics of the space involved. Through the use of sound, the spectator will be taken from the particular conditions under which it is perceived, beyond sound and the visual, to an experience, which again tends to be cognitive.

However, their coexistence with a real physical space and the spectator's view of it, set in motion a mechanism which is similar to the one we have already described, the ability to produce instantaneous perceptions and events in the mind. In such cases, the sound distances us from the visual characteristics of the space involved. Through the use of sound, the spectator will be taken from the particular conditions under which it is perceived, beyond sound and the visual, to an experience, which again tends to be cognitive. A mental space is created in which individuals will refine their experience, in response to certain specific conditions.

Common to both ways of using sound and what appears to be one of the great powers of combining sight and sound in different ways, is the manifestation of what others have already referred to as «productive memory», a quality which is produced in the subject and operates like a machine, interconnecting the power of the fragmented impressions received, whether they are visual or auditory. A living memory, that has little to do with mere storage. A memory, that is close to the event presented, and is able to generate both «collective impressions» and inter-subjectivity in a way which is essentially communal.4

2 A tape recorder wrapped in a plastic bag with a recording of a screaming woman, embedded in a concrete block with the outlet sticking out the back.

3 Further information might be found on the artist's webpage: http://www.bernhardleitner.com