The release of the record Ambient I: Music for airports in 1978, saw the emergence of a new musical genre. Eno wanted to create music that could function as ambience, accommodating «many levels of listening attention without enforcing one in particular», being «as ignorable as it is interesting», inducing «calm and a space to think».1Ambient music drew inspiration from the Musique d'ameublement of Erik Satie and John Cage's extensions of music to embrace silence, everyday sound and noise, as well as 1960's minimalism. In turn, ambient music would serve as an inspiration to later genres, such as ambient house and dark ambient, and also influenced other fields, such as theatre.2

Tape loops in the ambient music of Brian Eno

Aesthetics apart, Music for airports is also notable for its compositional approaches, making use of generative processes rather than depending on musical events prescribed to occur at fixed locations along a timeline. The structure of 2/1, the second of four tracks, is simple, and based on a number of tape loops, as discussed in detail by Erik Tamm.3 Each loop contains a single note «ah» sung by a female voice in a non-expressive manner, possibly with some further treatment. The note is followed by a period of silence: «I would just find the end of the note and then leave what I thought was a reasonable amount of tape at the end, because I wanted a silence at least twice as long as the sound. So I'd spin off a whole lot of extra tape and then cut the loops. It wasn't measured.« Each note would thus be repeated at a fixed interval, but the intervals would differ for each note. Put together, the voices create a texture with ever-changing patterns of combinations. «I didn't want to measure it, because I did want to arrive at complicated rather than simple relationships. (...). So sometimes you get dense clusters and fairly long silences, and then you get a sequence of notes that make a kind of melody.»4 The cover art for the album contains a graphical score depicting the process, and these days one could easily envisage 2/1 presented as a sound installation in a gallery space, using seven tape recorders to play back the loops. 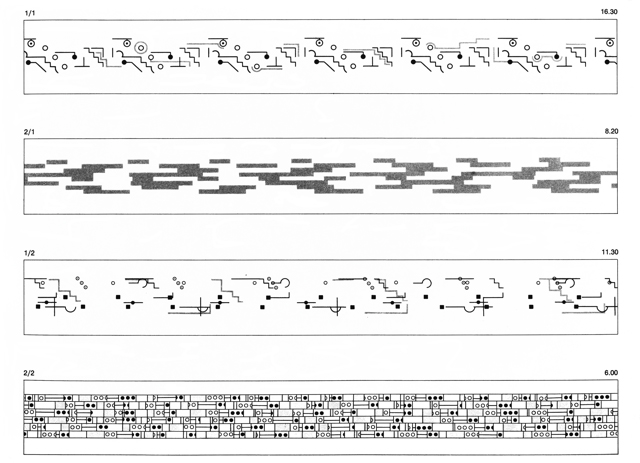 The independent layering of voices in 2/1 departs from the beat that underlies most historic and contemporary music, be that classical, pop, jazz or world music. During performances, the beat serves to ensure that all musicians are «on the same page». It can also be seen as serving a social function in aligning musicians, dancers and listeners within a community. Still, it is difficult to interpret the asynchronicity of 2/1 as a post-modern breaking down of social relationships. Rather, it might be interpreted as reflecting a more complex and less centralized continuous interweaving and interaction of individuals within modern society.

Brian Eno has expressed a keen interest in generative systems and cybernetics.5,6 and has repeatedly used such systems to control audio, light and video in his music and audiovisual installations.7 In particular, he is occupied with systems that although simple in their sets of rules, might unfold to produce rich and complex results. Works such as It's gonna rain by Steve Reich and The great learning by Cornelius Cardew have been quoted as sources of inspiration in this respect.8 The emphasis on experimentalism, chance, playfulness and simplicity aligns with core Fluxus ideas.9 The generative approach can appear to be related to minimalist and early conceptual art, e.g., works by Sol LeWit and Donald Judd.

Some years prior to the release of 2/1, Arne Nordheim devised a similar tape loop system for the sound sculpture PolyPoly, created for the Scandinavian Pavilion at 1970's World Exposition in Osaka.10 PolyPoly combined 6 tape loops of varying length, and played continually for six months. According to the composer the piece would take 102 years to return to the starting point.

The two works share the approach of combining asynchronous tape loops, but the aesthetic outcome differs. While 2/1 leaves the form transparent and exposed, Nordheim uses longer tape loops, and the complexity of the material disguises the underlying structure, while maintaining an impression of a continuous dynamic flow.

In contrast to Eno's emphasis on simplicity, computer-aided composition (CAC) has emerged as a strand of research within sound and music computing. CAC utilises theory and research on machine learning, machine listening, artificial intelligence and neural networks, resulting in more complex rule sets and computational programming. CAC is generally associated with musical styles with an emphasis on complexity; a continuation of modernist contemporary music.11 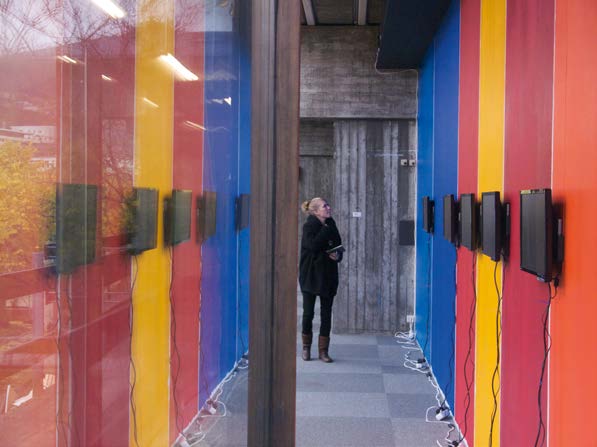 Generative strategies in my sound installations

When creating sound installations I want to invite the audience to engage in an act of reduced listening,12 not only for the sake of sound itself, but also because this might invite a more general heightened awareness and a tuning in to the site of the installation. The installations make use of the software Max,13 a graphical programming environment for real-time media that can be used to design computer-driven processes controlling audio, video, light or robotics. These processes will keep running for as long as the program runs, generating a continuous stream of audiovisuals composited in real-time.

Rather than positioning events at specific points in time, I can work with repeating occurrences, densities, flow and drift. Using Max, I can leave the timeline behind and emphasize processes that ideally might run indefinitely, in much the same way that John Cage envisaged: «A few years later, I was to move from structure to process, from music as an object having parts, to music without beginning, middle, or end, music as weather».14 2/1 has been an important source of inspiration in the development of a set of strategies towards the design of such processes.

In his ambient music, Eno mostly uses instrumental sounds. These are of limited duration with clearly defined temporal boundaries, and function as sound objects.15 I tend to work on extended sound textures lasting for longer periods of time, from 3 to 25 minutes. The sound textures originate from sound sources relevant to the particular project, and will generally be fairly static, rich in spectral information, bordering at a threshold between pitched sound and noise, with details and an inner life buried deep within. These qualities, hidden beneath the surface, are what interest me the most about the sounds I end up working with. They tend to get masked if many simultaneous layers are used, and for this reason I mostly work with only a few parallel layers. When combining layers, they remain asynchronous and independent of each other, similar to the tape loops of 2/1.

For each of the layers, there is generally a chain of audio processing that involves (a) sound file playback, (b) further real-time effect processing, (c) spatialisation (distributing the sound in space using multiple loudspeakers), and (d) dynamic control of levels. This chain resembles standard mixing procedures, and for each step there are a number of parameters that can be dynamically controlled using algorithmic processes.

The background layer of the sound for Please note after image, an installation in 2010 at Bergen Art Museum in collaboration with Jon Arne Mogstad and Jeremy Welsh, consisted of a 25-minute surround sound field recording made just outside the window of the gallery space. The recording would seamlessly loop and play continuously. The remaining three layers shared a pool of sound files, generated through further processing and abstraction of the field recording. Each layer would select a sound file, play it to the end, wait for a while and then randomly select a new one. For variety purposes, the selection process would avoid reselecting the most recently played files. These three layers served to tint and offset the sound of the raw field recording, creating a soundscape that would drift from the naturalistic to the abstract and synthetic, leaving a similar aural impression to the processed and layered images of the videos.

The installation Lines converging at a distance for the 750 anniversary of the Håkon's Hall combined two layers, based on time-stretched recordings of Frode Thorsen and Hans-Knut Sveen of Bergen Barokk performing the medieval sequence Ex te lux oritur, O dulcis Scotia. This was composed for the marriage of the Scottish princess Margaret to Norwegian King Erik II in 1281, a wedding celebrated in the Hall. One layer would be made up from breathy, gestural and expressive recorder sound, while the other was based on time-stretched cembalo recordings played back in reverse, forming a continuous texture of chordal sound. The latter was further processed in real time by applying formant filters softening the metallic quality and transforming it into suspended vowels resembling singing female and male voices. New vowels and voice registers were continuously selected and applied through gradual transitions.16

Rather I aim to expose the nature of the material early on, and then leave an impression of an organic drift of sound within a confined space of possibilities, a sound sculpture continuously rotating and reconfiguring itself along its own axes.

While spatial sound is a longstanding interest in my work, it is not the central topic of this text. Suffice to say that spatialisation serves a multitude of purposes that include activating relationships between sound and space, raising the awareness of, and sensitivity to, the space where the listener is situated, and improving transparency of the audio layers. Often sound is made to drift about by means of a combination of chance and mathematical description of spatial trajectories. Psycho-acoustically the movements enhance the perceptual experience of sound being situated in space, but it is less important that the audience has an exact impression of where the virtual sound sources are located at any one time.

The final processing stage is the continuous adjustment of sound levels for each of the layers. These adjustments are controlled using a combination of chance and mathematical curves to create a wavery drift that will move layers above and below the threshold of hearing. This approach was used for all four layers of Please note…. In Lines converging… dynamic sound levels were instead used to create cross-fades between the two layers. This resulted in a continuous stream of voice-like sound based on the processed harpsichord sound, occasionally interspersed by more abrupt and expressive wind-like sounds. 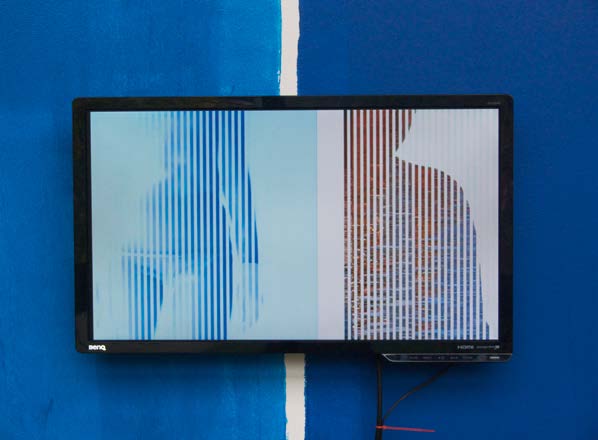 One peculiar consequence of this approach to addressing density and transparency is that the resulting soundscape is susceptible to changes in the overall sound volume. A change in volume is not just making the soundscape louder, but increases density and intensity, and might fundamentally change the expressive and emotional character of the work.

It is not important that the audience grasp the technical or algorithmic systems used in these works. More then anything I want to avoid the recognizable loop that seems to state «by now you have seen and heard it all, there is nothing more on offer». Rather I aim to expose the nature of the material early on, and then leave an impression of an organic drift of sound within a confined space of possibilities, a sound sculpture continuously rotating and reconfiguring itself along its own axes. I hope this might entice the audience to stay for an extended period of time, contemplating both the work and its site.

7 Many of his video and light installations are documented in the booklet accompanying the software DVD release Eno, Brian: 77 million paintings, Hannibal records, 2006.